Ben & Jerry's "Do the World a Flavor" Contest 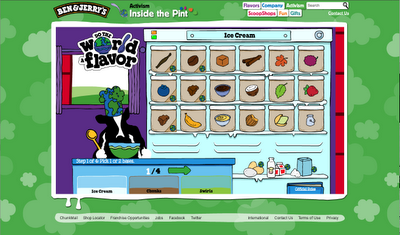 Seriously, with the sunshiney months upon us, ice cream events are starting to pop up all over!

You've got a couple of weeks for this one...Ben & Jerry's is sponsoring another flavor contest: Do the World a Flavor. Like flavor contests past, you have to use their fun site to choose a base, chunks, a swirl, and a name (and design the packaging if so inclined) and you're done! Oh, that is until you win -- then we want a full report!

Prizes are as follows (text below is directly from Ben & Jerry's Official Rules):

Second Prizes: One (1) per country (17 total): Ben & Jerry's ice cream. Prize awarded in the form of 12 Ben & Jerry's coupons each good for 1 pint of ice cream.
First Prizes: One (1) per country (17 total): A trip for the winner to the Dominican Republic. Trip includes round trip coach airfare for one (including applicable sales and airport taxes) from internal airport nearest winners home and hotel for 6 days. Trip also includes three (3) meals per day for six (6) days and ground transportation.
Grand Prize: One (1) Grand Prize winner awarded to one of the First Prize winners. The winner's flavor launched as the 2010 global flavor. Flavor will be produced as a pint for Europe and Turkey and as a limited Edition Scoop Shop Flavor for US, Mexico, HK and Singapore. Grand Prize has no monetary value.

All this is being done to promote their fair trade efforts, for which we give a big thumbs up. Visit us in coming weeks for future fair trade ice cream posts!

Their flavor factory concept is cute, to be sure, but I find it too limiting. Seems most new flavors these days are basically combinations of chunks of candy, chocolate, cookies or cake. I'd like to see innovative flavors from Ben & Jerry again.

Ice Cream Forum, I hear what you are saying...I wish there was a "write in" section!

I was a winner in this contest and never received my prize! They screwed me over :-(