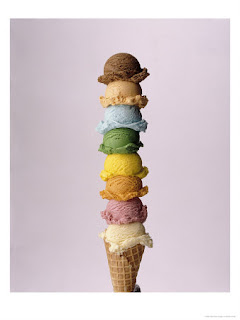 Seriously, I knew I was not to blame when I started eating a pint of ice cream and couldn't stop until my spoon scraped the bottom. How could I eat the whole thing? Must have been an imaginary spoon that helped me along of course! Thankfully new research has come out that says fat from certain foods sends off signals to the brain to keep eating so my spoon kept digging! Oh and they say this effect can last for three days so that ice cream binge is SO not your fault!
Check out the full story on science blog.
Very interesting!
Posted by Tina at 1:33 AM 6 comments: 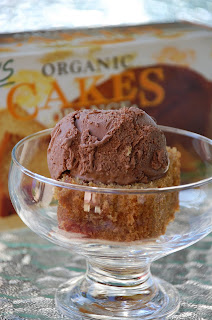 Cake and ice cream...the perfect duo and on a warm end of summer day even better. Oh and even better that Bethany was along to try it too!
Now who would have thought a premade frozen cake would even be worth opening but let me tell you that Amy's Organic Orange Cake was so surprisingly moist and yummy. It had a great orange flavor that was not too overwhelming but perfectly refreshing and light. I am a baker (well, was pre-two kids!) and freshly baked cake is a must but my mind has been changed by this little vegan cake. Yes it comes in a box but when you open it, the cake is nestled in a sweet little cardboard cake liner that looks like it just came out of the bakery or your own oven. I give Amy's kudos for stepping up on the packaging...it goes a long way especially when you are trying to disguise it as your own!
Well I guess I have to move on cause this is an ice

cream blog right?! So the topper of it all was Green & Black's Organic Chocolate Ice Cream. I had no clue who Green & Black was but come to find out they are amongst the elite of award-winning chocolate makers. Made from bittersweet dark chocolate and fresh organic cream its no wonder this ice cream was so smooth and rich. (But i do have to admit that both Bethany and I thought it seemed icy at first but it was just the top layer...think this one was in the freezer for a bit). With that said not sure I put it above my favorite Ben & Jerry's Chocolate but it is really good and has the organic factor working for it.

All in all...love the combination of orange and chocolate and also love the fact that they are both all natural. Both Amy's and Green & Black's obviously are natural winners here. Next time I think I might have to try making my own ice cream with Green & Black chocolate. If anything its a good excuse to try the chocolate!
Posted by Tina at 9:57 AM 1 comment: 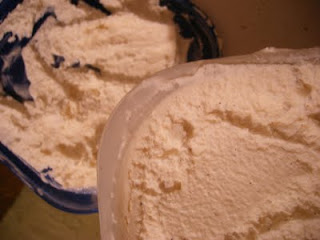 Spice Dish escaped to Europe this summer, and lucky us, we get a perfect fall treat as a result! Bon Appetit!

This flavor was inspired by my recent trip to Paris. One morning for breakfast, I happened across some apple flavored yogurt. Simple, but completely divine. Unlike anything I’ve ever tasted in the US. Maybe it’s because French dairy products, are well, actually made of dairy. Not a collection of chemicals and preservatives. Whatever the reason, I was in love. I couldn’t stop thinking about that yogurt and decided I hate to recreate it at home. This is rich, creamy, speckled with vanilla and perfumed with a hint of tart, green apple. Enjoy!

With a cheese grater, shred apples (including the peel) into a medium saucepan. Stir in lemon juice. Pour 1 cup of the cream into the pan. Add sugar & salt. Stir. Scrape the seeds out of the vanilla bean and add to the mixture. Then drop the bean in. Warm the mixture until sugar dissolves. Remove from heat and add rest of cream and milk. Let steep, covered, for one hour. Strain into large bowl and chill completely. Churn in your mixer. For a caramel apple effect, top with a creamy caramel sauce.

Since two people sent me links about this today (thanks Rachel and Marsha) I figured I'd better get posting! (This is also a nice break from a logo project I have been staring at for too long...)

I've never heard of Howtoons before, but it is apparently "The World's Greatest D.I.Y. Comic Website"...pretty cool.

Checkout this Howtoon below with instructions on making ice cream!

Are You Making Ice Cream?, ©Howtoons, howtoons.com
Did you read it closely? You are going to need it...

Howtoons is closing out the summer with a contest -- use the Howtoon above to make ice cream, and send in your best recipe...you could be a winner!

Since I couldn't find an "enter by" date, I sent an email to find out. The super nice (and awesomely quick at replying) folks over at Howtoons just sent me an email letting us know when their contest runs until: "Recipes must be submitted to us by the end of the day 9/21. We will then post the winners by 9/28."
Posted by Unknown at 2:36 PM No comments:

My awesome younger sister sent me this link from Bust a while back and I thought it would make for a nice post today as the kiddos are heading back to school. 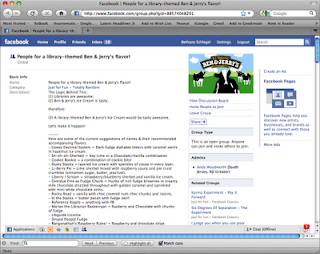 Looking further into it, I found the facebook group, People for a Library-Themed Ben & Jerry's Flavor. This group was stated by A New Jersey librarian, Andy Woodworth. What fun! My personal favorite? The Gooey Decimal System. Do kids even still know what this is these days? Well I'm off and heading to the 641.862s...
Posted by Unknown at 10:59 AM No comments:

It's been more than a month that I have had to recover from the Great American Ice Cream Event of 2009, aka, I Scream 2009, my annual ice cream party.

This is going to have to be a four part post, as you'll be tired by all my writing in one. Fifteen flavors per post, and the winners in the fourth. Stay tuned! 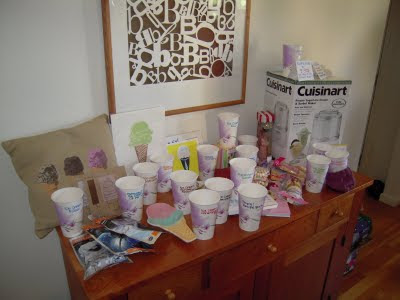 This year's party brought a great group of guests (which woulda been better if Tina could have made it!), 45 flavors (44 by me, and one from a guest -- yes, I am gaga about ice cream), and tons of great raffle prizes -- after the $15 Kohl's sale on the Cuisinart Ice Cream Maker, we even bought one of those to raffle off! You can see the raffle table at left -- and above it is the super cool "B" cutout Husband bought just for me! (Photo by Jennifer Wickman.)

Here's part one...as always, I am going to try to get up some good recipes, but if I am taking too long, feel free to bug me if you want a certain recipe. 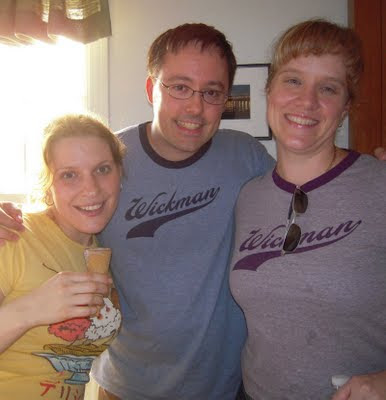 Stay tuned for part two of the series!

Hope you enjoy the glowing picture at right of me and Team Wickman! BE sure to note the other awesome present from Husband...the banana split tee! Thanks to Jenn Wickman for this photo as well!
Posted by Unknown at 5:13 PM 4 comments:

Oh, and while you are there, be sure to check out her directions for a not only tasty-looking but absolutely beautiful, charming DIY Ice Cream Parlour "Make Your Own Sundaes" Concept for a Wedding or a Party. A-MA-ZING. Hmmmm, we might have to feature Amy soon -- she's all that we love -- ice cream and great design! paper crave is another blog I follow regularly, and I came across this (inexpensive) little gem.

For $2.50, PaperGlitter sells PDFs to create your own little pink and green ice cream trucks (at right).

So fire up your printer, sharpen your scissors, and let's show some ice cream love! 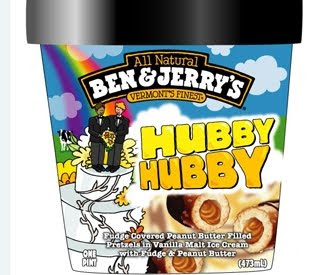 Ben & Jerry never ceases to amaze us here at Scoopalicious. Beginning this week Ben & Jerry's is temporarily renaming their hugely popular “Chubby Hubby” ice cream to “Hubby Hubby” in celebration of the start of legalized gay marriage in its very own home state, Vermont. So for the next 30 days Ben & Jerry's, in partnership with Freedom to Marry, will show their sweet support of a great cause and is truly hoping this will raise awareness of how important marriage equality is not only in Vermont but everywhere.
As the state motto goes...Vermont truly is for lovers (& not just ice cream lovers!)!
Posted by Tina at 2:16 AM 2 comments: 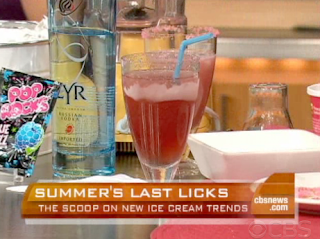 Just in time for all those labor Day parties....cool summer cocktails! This past Friday on The Early Show Somer Perez, a mixologist of Couture Cocktail Concepts, had me running for my blender with these hot summer cocktails. Try em out this weekend and we'd love to know how they were. Enjoy!
RECIPES:
Poppin' Pomegranate
Whole Foods Pomegranate Sorbet*
Zyr Vodka*
Simple Syrup
Pop Rocks Candy (to rim glass)

Ice Creamed Brazilian Mojito
Haagen-Daz "5" Mint Ice Cream*
Leblon Cachaca*
Brown Sugar
Blender
(if anything check out the Couture Cocktail Concept web site....LOVE it....typography is so elegant and chic and the less is more design is truly beautiful
*try these brands if you can but I am sure any brand will do
Posted by Tina at 1:56 AM No comments: