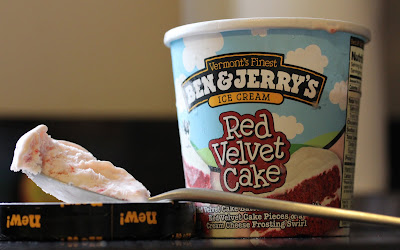 I went to the grocery store today, hungry. Bad idea. Even worse idea? On my way to the cash register I thought that the best route would be past the frozen treats. I bought three pints of Ben & Jerry's. That's after the package of cookies I picked up, but I don't really think they count because in the end they were just horrible.

The ice cream though? I thought it was in my best interest as an ice cream blogger to pick up three new flavors: Red Velvet Cake, Clusterfluff and Late Night Snack (to find out more, you'll have to visit their flavor case because unfortunately their Flash-heavy site does not allow you to link to a particular flavor. Tonight I opened the Red Velvet (described as "Red Velvet Cake Batter Ice Cream with Red Velvet Cake Pieces & a Cream Cheese Frosting Swirl" on the container) and I can't say I was impressed. Maybe I'm biased with my own made-it-to-Craftzine Red Velvet Ice Cream, but not only did I not find B&J's Red Velvet to be that yummy, but I also didn't find it to be too Red Velvet-y.

First of all, when you open the container, it's not bright red like you'd expect (which might be a bonus, because that would be a super lot of food coloring additive!), but it looked like strawberry ice cream. I mean, completely -- strawberry chunks and everything. And I couldn't see any cream cheese swirls in the pale pink ice cream. I actually found the first bite to be super sweet, but not with any particular flavor. Eventually, I got a little bit of cream cheese taste, but really no striking Red Velvet taste. In the end, I kept thinking I was eating strawberry ice cream, so I don't know if it is what I expected to taste, but I kinda did taste strawberry! (No, I did not buy strawberry by accident!) I am a fan of lots of Ben & Jerry's flavors, so I can afford to be picky -- it's not like I will open the grocery freezer and find nothing I like -- so I think this flavor is going to be on my "not again" list. But it was worth a try.

I just saw Blue Bunny has a new Red Velvet Ice Cream in collaboration with Duff of Charm City Cakes and Ace of Cakes fame. They also created a wedding cake ice cream together too, so maybe those two Blue Bunny flavors are the next I will have to try, because with the price tags on those Charm City Cakes, the ice cream is the closest I'll get to an actual Duff creation!

Right now though, Stone Ridge Creamery is my top contender in the Red Velvet craze category.

Stay tuned for the Late Night Snack and the Clusterfluff review!

"Eventually, I got a little bit of cream cheese taste, but really no striking Red Velvet taste."

To me, this is what Red Velvet cake is altogether -- no striking taste. It's very underwhelming. Pretty, but not worth it at all.

Hmm, interesting. I like the slight chocolate/slight vanilla taste with the bit ouf sourness from the buttermilk...I think it is both pretty and yummy!

Red Velvet cake is subtle in general. I think this flavor hits the nail on the head. I LOVED every last bite!

Violet Warrior, I actually am growing to like it and I am glad you did too! I think I was just biased to the one I made! Haha!

I was intrigued to read your pov on B&J's Red Velvet ice cream after trying it myself about a month ago. And let me just say that I usually like ANY ice cream related to cake, batter, or dough of any sort, but I completely agree with you on this flavor. It was like eating some really overly sweet, rich and decadent strawberry ice cream. I must have gotten more cream cheese in mine though because thats ALL I tasted with some bites. Definitely was not my type XP.

You're right, it looks and tastes like Strawberry - my least favorite ice cream flavor...it's awful!

THE RED VELVET ICE CREAM IS THE BEST. IT DOESN'T TAST LIKE STRAWBERRY BUT NOT RED VELVET EITHER. IT DOES TASTE LIKE A CAKE MIX AND IS ABSOLUTELY WONDERFUL!IT EVEN HAS PIECES OF CAKE IN IT. MY FAVORITE ICE CREAM EVER EVER EVER!! I DON'T KNOW HOW YOU COULDN'T LIKE IT. IT'S SO GREAT!

Are people not aware that red velvet cake is CHOCOLATE cake that is died red?! This ice cream does not have any red velvet flavor whatsoever. It tastes like strawberry cheesecake to be completely honest. I was disappointed. Should've stuck with half baked. :(

well... halfway through already and i dont taste any cream cheese or see any 'cream cheese swirl'... disappointing.

Really awesome work. So when you need any converter for files then use this;