Baskin Robbins is offering their customers three days of a few great deals.
For $1, $2, or $3 you can get a sweet treat from today through Thursday, April 25th.

Find a shop near you.

It arrived only a few days before I got an new ice cream book as a gift. I hadn't made ice cream in a while, what with a new baby and all, and I thought a new book and a new ice cream maker were the perfect combo to get me in the mood.

So I cracked open the new book, whipped up a few recipes from it, and tested the out in this new machine.

I then got an email from a friend who had also gotten a sample of the machine and he asked how I liked the machine. I wrote and told him

Tina graciously let the machine be sent to my house, so I am the only one who has tried it and I will be the only one who is trying it since we were going to share it but I really like it so she may never see it! Just kidding!!!! Of course Tina will get her turn! I can't wait for her to use it too!

I have only used it once so far, but it has gotten me back on an ice cream making kick again (and I want to try your recipe for cake batter ice cream!)

In my opinion (and I might just turn this into a post!) it has it's pros and cons.

One thing I love about the NewAir is that it is so quiet! The Cuisinart I have is SO loud. I also think the NewAir is easier to clean (I hate cleaning the paddle on the Cuisinart ICE-20 I have -- but the newer version ICE-21 paddle looks easier to clean!!!), easier to make ice cream on a whim (I usually leave my canisters in my chest freezer, but sometimes I forget to replace them, or in the summer for the ice cream party, I have four or so in my chest freezer waiting to be used -- the compressor eliminates all that)...

The volume is smaller in the NewAir (1 qt) as opposed to 1.5 qt. I am not sure this matters. It IS bulkier (and certainly heavier to take out and put away and I don't think my husband wants it living on our counter) -- at the same time, it's more contained. With the Cuisinart, I have to store the motor, etc in one place together and the freezer bowls elsewhere.

He then replied that he had found the ice cream much icier and airier in the new machine than in the machine he usually uses, and I realized I had told him everything about the process but nothing about the product! Truth be told, I hadn't focused on the texture of the ice cream I had made because the first batch was that super sour kiwi ice cream and the second batch I had only tasted right out of the machine and I really like my ice cream to ripen. So I tested the texture of the second batch.

I wasn't impressed. My ice cream seemed icy and not too smooth. Wait! Keep reading!

I began to wonder if the problem was the recipe. I had made a new vanilla ice cream recipe, and deviating from the recipe, I had used Ground Madagascar Vanilla Beans. Maybe the texture that was bothering me was the ground beans (they do work out lovely in cupcakes, but maybe they aren't meant for ice cream).

In his email, the friend had also mentioned that he was going to try a side by side comparison with his new machine and his old machine. Oh, wait! Great idea, I thought. I hadn't thought to do that. AND I was testing recipes I had never tried before. And I had even altered one of them. Maybe my review wasn't all that fair.

So then I churned it, in both my Cuisinart and the new NewAir. Right out of the machine, I have to say, I was really impressed. The ice cream wasn't icy, it was incredibly smooth, and just dense enough. Side-by-side, the NewAir ice cream seemed to be a little lighter and a little airier than the Cuisinart, but the difference was incredibly minor and I wouldn’t have been able to tell the difference had I not been acutely aware of whether the machine made “airier” ice cream. I had a friend over who enjoyed the ice cream from both machines (I put a scoop of each in her bowl) and even after I told her each scoop was different, she couldn’t distinguish a difference and only reported back that she thought it was very good vanilla ice cream.

In the end, this product was a success. I’d be interested to see Tina’s review when she has a chance to play with the machine.

As for our ice cream making friend who had bad luck, our emails uncovered a few thoughts as to why he felt differently. He’s a self proclaimed ice cream geek with good reason. While Tina and my ice cream making background is purely self taught, this friend has a scientific background in ice cream making. Maybe his palette is a bit more discriminating. He also uses a fancier machine than we do. Tina uses a KitchenAid Ice Cream Maker Attachment, I use a Cuisinart, and he uses a Lello 4080 Musso Lussino 1.5-Quart Ice Cream Maker, so maybe the $200 NewAir is a big step down from his machine.

Stay tuned for Tina’s review as well as additonal tests from me!

This has to be the most intriguing package I've ever received for ice cream. It doesn't look like ice cream. And doesn't include ice cream either. But it has alcohol...almost as good! And it is associated with the first ever 24-karat gold gown designed by Zac Posen and a mini film to debut at the Tribeca film festival. Hmmmm....

Interesting...go on. What does a premium ice cream brand do for a new product launch of a decadent new product. It aligns themselves with others who are as luxurious, daring, in the spotlight, and crafted from the finest ingredients. Smart, fun and intriguing! So along with the launch of the Magnum Gold Bars, awesome vanilla bean ice cream with sea salt caramel and dipped in Belgian milk chocolate, comes a $1.5 million 24-karat dress designed by, Zac Posen, and a short film “As Good As Gold,” by Emmy-award winning director Jon Cassar. starring Joe Manganiello along with model Caroline Correa . Wow, that's actually pretty cool and it launches on my birthday at the even hipper Tribeca Film Festival on April 18. Tried getting them to give me tix to that....oh well maybe next time! I'll eat my ice cream and like it.

Oh actually I will say, I'll love it I am sure because truthfully, and regardless of what they send me, this stuff is gold. It really is super premium and the chocolate is to die for. It's one of those things that is a true treat and I don't think I could have daily without feeling a bit guilty but this stuff is good and worth the indulgence every once in awhile. Truth be told, they are the kind of things I hide in the back of the freezer so when my kids go to look for their dessert they choose the ice cream sandwich never knowing mom's little hidden jewel in the back!

Stay tuned. We'll be sure to follow the happenings of the dress and the film. I am curious to see how this all plays out. In the meantime check Magnum out on Facebook to see the launch of this all yourself.

The sun is shining here in Boston and almost 70 degrees. Couldn't have asked for better weather for Ben and Jerry's FREE cone day and celebration of 35 years of awesome ice cream making!

Check out the GMA crew this morning taste testing Ben and Jerry's in honor of their 35th celebration and talking about what a great town Burlington, Vermont is. We agree! 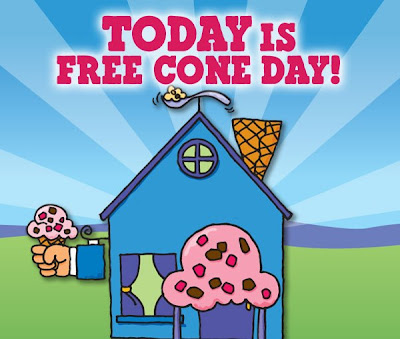 We hope you make it to a scoop shop today for a free cone. Click here to find a location near you.
Posted by Tina at 1:25 PM 1 comment: