This post is kind of unseasonal, but my friend Melanie (also my partner at July Twenty Fourth!) is visiting from California and she's the one who suggested this flavor so I thought I'd perfect it and make it for her. Additionally, Husband has been giving me a hard time about the frozen cider donuts taking up room in the freezer. AND it's time to start churning for  the annual summer ice cream party. 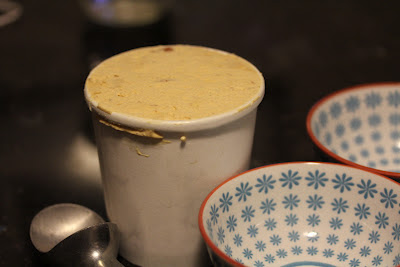 You need:
How to:


(This recipe is adapted from one of my favorite ice cream books: The Ultimate Ice Cream Book: Over 500 Ice Creams, Sorbets, Granitas, Drinks, And More)


How/where to get Boiled Cider:
First of all you need Husband. He is awesome at boiling down cider to syrup. Buuuuut, since I kind of need him here, I'll give you two other options.

While Husband cannot come to your house to do it for you, he has graciously agreed to share his method of making 1/2 gallon of cider into 1 cup of syrup (without burning it like I did the first time!)

Method 2:
Buy it. I have never used Boiled Cider but I have seen it at the King Arthur Flour Store. You can also buy it directly from the manufacturer's site, one of few places that still makes it.

The reviews are in...Husband thinks it needs to be sweeter, which is really weird for him to say. He's usually not into things being really sweet.

Melanie says it's a very strong flavor with a punch to it. "A very strong tart apple flavor," she describes it. "That was yummy," she said when she put the bowl down. "A really, really good cider flavor."

I don't think I would order a whole dish of this but a seasonal scoop would be really refreshing. It's not that I wouldn't order it because it's bad (it's really very good) but it's strong. It's very cidery -- which is exactly what I wanted to make when I mixed it. I think the donut bits are a really lovely cinnamony taste when you come across them in the cider base, too. (I got my cinnamon sugar cider donuts from Honey Pot Hill Orchard in Stow, Massachusetts...)
Posted by Unknown at 10:34 PM

This Looks great. I will have to put this on the list of things to try. Do you make your own Cider Donut's?